Show Up Every Day 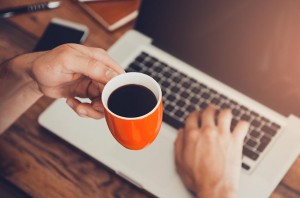 There I was sitting in the small dark theatre on a random Wednesday with my eyes welling up as I fought the streams trying to push their way out. It was a one woman performance called “Oh My Sweet Land” written by Amir Nizar Zuabi meant to help humanize the millions of refugees displaced by the war in Syria. This reading was being shown to raise money for IRC, an amazing organization that supports refugees here and abroad. I wasn’t even sure I was going make it to the event that morning and now, here I was, fighting back tears and grateful for the experience.

I use the word “random”, but that’s not really the right word. I was there because I was feeling disconnected. You see, when you are half one thing and half something else (in my case half Syrian and half Hungarian American) you are always in flux. In one moment you are one thing and in another something else-you are both and neither at the same time. The performer of the play, Nora El Samahy put it perfectly after the reading when she described playing the main character that happens to be half Syrian and half German: it’s like having one foot in each world, both part of you, but neither of which you feel fully comfortable claiming. There is part of you that always feels like a bit of an imposter–she understands this well being half Egyptian and so do I. So, I showed up this time…this “random” time to get more connected to my Syrian half and it was just what I needed.

Now to the folks at Golden Thread Productions, there was nothing random about this night or any of the other nights (and days) they produce plays. You see, whether I was there or not, they were always there. Time and time again-planning, writing, directing, rehearsing for almost 20 years now–all so that I could cry in the theatre this night. All so, they could connect with me (and the others that showed up) and to tell this story that so desperately needed telling–to present a perspective that isn’t being portrayed in the news or in mainstream media.

That is the key, isn’t it? Starting with an idea, a cause, a mission you truly believe in (Simon Sinek calls it your “Why”?) and then showing up every day to work on and further it. Sometimes, especially at first, no one will show up (not even randomly), but over time, if you stay true to it and keep perfecting your craft, you will find others like you, the word will spread and before you know it, you will have made a real impact. This stands true in activism, art, business or whatever you choose as your cause–your “Why”.

It is easy to get discouraged in the beginning–especially nowadays. We are inundated and obsessed with the “overnight successes”. We hear about the rags to riches entrepreneurs and we see things go viral on the web out of “nowhere”. It is rare that anyone talks about all the hours/days/months/years that went into these seemingly instant successes. No one talks about all the times that nobody showed up or they failed or, about the 20 years of work that goes into one night–one moment.

The “random” and powerful experience I had (just when I most needed it) happened, not because of chance or whim–it wasn’t random at all. It happened because the creators of that experience care enough to show up every time–whether I do or not. They know that if they show up each and every time–even when it isn’t “perfect” or they don’t quite “feel like it”, that there is a chance to connect–a chance to create a moment like the one I had. For them, and anyone who does important work that they believe in, those are the moments they live for and trust will happen with enough work and patience. They learn over time that when they show up time and time again, their family of believers will grow. And, that they will tell others that may tell even more and their cause will be furthered–no matter what it is.

Do yourself a favor and find out what it is you believe in. Use that as your guide–your plan and then show up. Show up every day. Work hard. Try. Fail. Show up again and again and again….

See each time for what it is–a chance to grow/learn/connect. See each as a possibility to create that perfect “random” experience that can potentially change everything for one person, one place or who knows, maybe even for all of us everywhere.