Not passionate about what you do? Maybe you should do something else 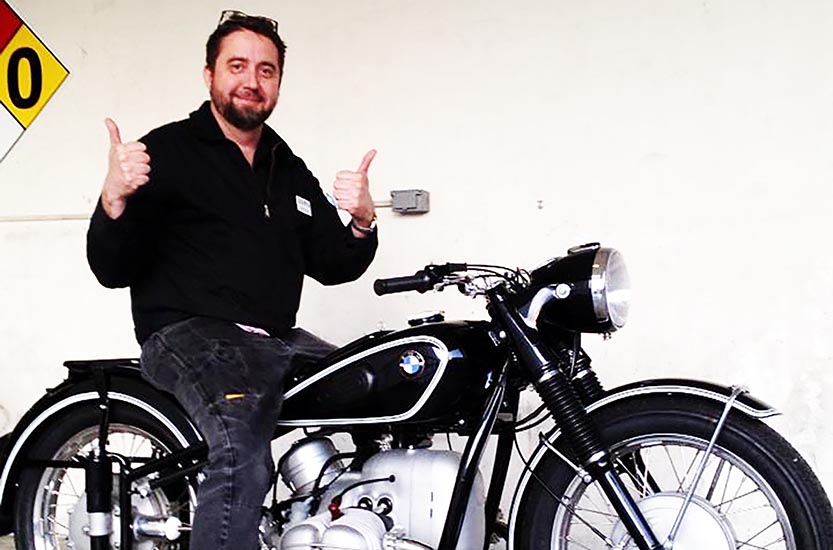 Lately, I have been thinking a lot about passion and the role it plays in success, happiness and fulfillment in your work. Which in turn got me thinking about a friend of mine, Harrison Cole. A few years ago, he did something that most of us dream, but few have the courage to try. He quit his “real job” and decided to follow his passion working at something he loved.

I met Harrison in 1991. I had just moved to California and was a vintage motor scooter enthusiast (as I still am today – these are mine). Back then Harrison was the contact for the local scooter club in the region. We met for coffee, became fast friends and have been ever since. Over the years, I watched Harrison’s love for Euro Bikes grow (eventually overshadowing Vintage Scoots). He was an excellent manager in the service industry and always gainfully employed, which fed his insatiable habit for two-wheeled vehicles. He had the money he needed, but had an unfulfilled, entrepreneurial spirit that refused to sit quiet despite his best efforts. In 2004, after losing his mother to a long battle with cancer, he decided life was too short and that he needed to do something, but what? He found the answer a few years later in his very own garage while working on some of his most prized possessions – his motorcycles!

From that moment, he knew he wanted to work in the motorcycle industry, but how? He loved and knew a ton about bikes, but didn’t have the kind of knowledge or experience that would land him a job in the industry or get him funding to start up something of his own. In 2008 he turned to a long-time friend and soon-to-be mentor Randy Felice for advice. Randy owned a European motorcycle/Scooter dealership (A&S Powersports). After several conversations over the next couple weeks Randy offered Harrison a sales job. It meant a serious pay cut (at least in the beginning). Like most sales jobs, it was an “eat what you kill” situation, which meant he had to learn the craft quickly if he was going to make it before his savings ran out. He decided to go for it, jumped in headfirst, immersed himself in the biz and quickly realized two things:

He came to the conclusion that his passion for motorcycles, the feeling he got when riding them, and the community that surrounds them would be the key to his success.

Despite it being his job description, he decided from day one that he would not try to sell people motorcycles. Instead, he would show people the world of motorcycles as he saw it (through Ducati “Rosso” colored glasses) and once they saw it, he was certain they would want in. He wouldn’t sell a product; he would proselytize a way of life. This method could only work for a true believer and subscriber to said way of life and that he was on both accounts. This approach not only worked, but also quickly made him stand out in the industry.

Let’s look at what he did and still does and how you might do the same with your passion:

Become a thought leader: He spent lots of time becoming and continues the effort to be an expert in his field. He stays abreast of the latest technological advances, accessories, and news of his industry. He travels around the country to attend technical trainings and demo forthcoming bikes. In short, he eats, drinks, breathes and sleeps motorcycles and is always generous with the knowledge he has accrued, whether or not you buy a bike from him.  He takes great pleasure in being a resource for his industry and the community.

Be that thought leader and be generous with everyone (including your competition). You know you’re a thought leader when you are confident that you are always a step ahead in your industry. By the time your competitors try to mimic what you’re doing, you’re already on to the next thing. Don’t worry, the people that matter will notice the difference.

Put the customers’ interest ahead of your own: He won’t sell you something you don’t want or need. His goal is to get you onto the perfect bike for you. His title on his card isn’t Sales Rep, it’s Cycle Therapy. He chose this because he found comfort and solace in motorcycles and wants the same for you and everyone else that walks into his showroom. Hard selling simply isn’t a strategy that will keep customers for the long haul. He knows he needs to create long-lasting connections with them that go beyond the sale.

When all else is equal who would you rather buy from and recommend time and time again? Is it someone who wants to sell you something that collects dust in your garage or someone who wants to sell you something you really need, love and use as much as possible?  Often when selling, we lose sight of who we are selling to and why. If you genuinely shift the focus to their best interests, they will notice and be more receptive than if you try to “sell” them. Check out some of A&S’s Yelp! Reviews. The positive reviews name Harrison specifically for this trait quite a bit. Even one of the bad reviews makes a point to exempt him from their remarks. (Incidentally, if you want to see the appropriate way to handle a bad review, Randy nails it)

Become a Community Builder: Harrison figured out early on that what drew him to motorcycles just may be what draws others to them as well. It is not just about the bike, but the experiences you have with them, the memories you create and the community of which you are now part. To that end, he actively participates and contributes to the motorcycle community. He attends and organizes events and educational sessions, contributes to online forums. He does things to promote the community in a selfless manner. He knows that the more he puts into the community as a whole, the more he will get out both personally and professionally.

Is there a community you can be part of related to your passion? If not, can you start to build one? We all love to be part of something. I am not talking about concocting something to sell more products – people don’t have time and are too informed nowadays for that. I am talking about genuinely engaging and connecting with people of like mind and interest to further the cause of the thing you all love.

Do More of What You Love: The real interesting thing is that Harrison gets to do more of the things he loves and gets paid to do it. He is happier at work and in his personal life than he has ever been.

That is the thing about following your passion; you get to do more of what you love to further succeed in doing what you love. Sounds easy, right? It isn’t, you still have to work hard (maybe even harder than you ever did before). The difference is that when you are passionate, the work seems a bit easier because it fulfills and energizes you while you are doing it.

Always be Genuine: Harrison is the real deal. He loves motorcycles and the people that ride them. He is in awe of the companies that design and build them and the mechanics that maintain and tune them. He still gets what my wife describes as the “10-year-old boy look” on his face when he sees riders racing them.

The one thing about passion – you can’t fake it. If you are in it for the money and only the money, people will figure you out pretty quickly. On the other hand, true passion is infectious, and if you are genuinely passionate about what you do, people will notice (and just might join you). You won’t have something for everyone, but will have the exact right thing for those people that share your passion and believe me, that alone can be more than enough.

Going back to my first meeting with Harrison 22 years ago, he loved scooters and though he didn’t know me or have anything to gain, he helped me be a part of that community and do the thing I loved in an unfamiliar place. For that, I will always be thankful. His passion for our mutual interest made that instinctive behavior for him even back then. To think it took nearly twenty years for him to turn that instinct into a livelihood – one that monetarily surpassed the income of his “real job” and is off the charts in terms of his personal happiness and fulfillment. It just goes to show how effective fear is at keeping us from following our passion and how rewarding it is for those of us who break through. It has been great to see Harrison conquer the fear and do what he was always meant to do.

Now, how long are you going to wait to conquer it and do what you were always meant to do?