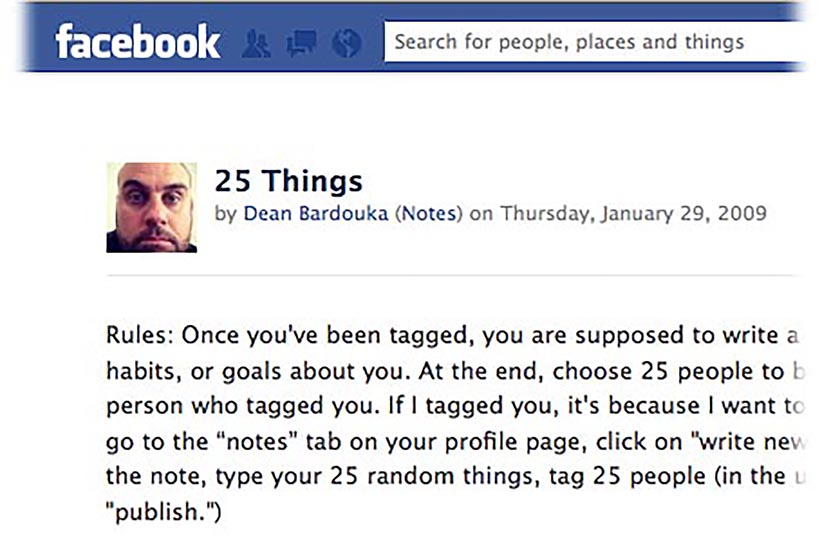 Last night a good friend “liked” an old note of mine on Facebook…a really old one called “25 Things”. Sound familiar? It was a MEME that took Facebook by storm in late 2008, early 2009, generating more than 5 million “notes” in one week at its highest point.

For those who missed it, here’s how it worked: you would get tagged (along with 24 other people) in a note by a friend who listed 25 random things about himself. In turn, you were asked to do the same and tag 24 other friends plus the person who tagged you. Some people loved it and others hated it. Many mainstream pundits wrote scathing articles, such as the Time Magazine article “25 Things I Didn’t Want to Know About You” in which Claire Suddath wrote, “I’ve finally found something more stupid than Twitter”. At first I, too, was skeptical of what seemed like a modern version of a chain letter, but after being tagged several times and reading the notes, I decide to craft my own.

During those months, I read dozens of these notes from close friends, acquaintances, celebrities, childhood friends, ex-girlfriends – even random people I didn’t know. As you might expect, some were boring, superficial or snarky, but many of them were funny, and interesting and beautiful. I learned about the amazing lives people led since I had last seen them (almost 20 years for some). I found out their likes and dislikes, how they struggled and triumphed and about the people they loved and lost. Though I was a fairly early adopter of social media, this was the first inkling I got of its true potential.  For the first time I got a taste for how it could foster and facilitate true connection on a mass scale.

In preparing to write this, I looked back at a lot of articles written at the time – particularly the negative ones. Today, it is hard to imagine a reality where so many people dismissed or underestimated the power of social media. Even more interesting is to see how unprepared the traditional media outlets were for the impending swell of user-generated content that would soon become their competition. In retrospect, “25 Things” might still look ridiculous to many of those pundits (and you for that matter), but I wonder how their opinions have changed on social media in general? Maybe I could follow Claire Suddath on twitter and ask her?

Fact is, the majority of us had no idea how much a part of our lives social media would be or how important it would be for businesses. Sometimes looking back is great reminder of why we should remain flexible and keep an open mind to new platforms and content (even if you don’t get them at first). Try new things, make new connections – take some chances. If you don’t, at some point you will miss something amazing, I guarantee it.